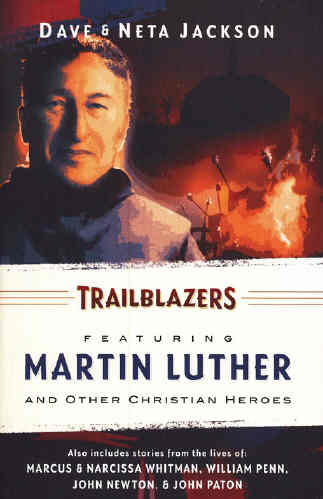 Five Books in One volume featuring:

Spy for the Night Riders: Fifteen-year-old Karl Schumacher feels very fortunate to be a student and servant for the highly respected university professor and church-reformer Dr. Martin Luther, until a violent revolt forces Luther and his followers to fear for their lives.

Attack in the Rye Grass: The Native Americans are scared and angry when a group of white settlers arrives on the Oregon Coast, bringing with them the deadly measles virus. So twelve-year-old Perrin Whitman works with his uncle and aunt, missionaries Marcus and Narcissa Whitman, to keep the peace.

Sinking the Dayspring: After the death of his mother, young Kevin Gilmore finds himself alone and penniless until he discovers the Dayspring and missionary John Paton; soon Kevin finds himself traveling with Paton to bring much-needed supplies to the missionaries of the South Seas.

Hostage on the Nighthawk: When Theodore Story and his family become hostages on the pirate ship Nighthawk, they must trust the help of the Indian boy Tammany, who has a good relationship with the Storys' close family friend Governor William Penn.

The Runaway's Revenge: After years of mistreatment at the hands of his owner, former slave Hamilton Jones wants revenge on John Newton, who was responsible for bringing Hamilton's mother to America, but Hamilton doesn't find the evil man that he thought Newton to be.

No Guts No Glory - How to Build Youth Work that Lasts