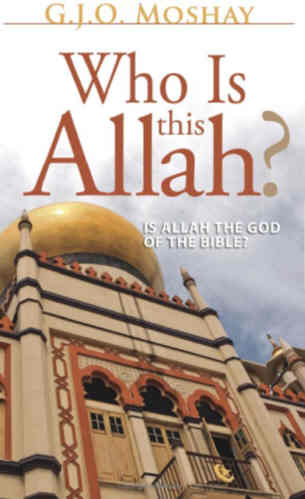 Is Allah the God of the Bible?

In any of the one hundred and fifty sects and sub-sects of Islam, the common denominator is Allah. Who is this Allah? Much has been written on the religion of Islam and its prophet; but not much is said about the God of the religion. One reason is the assumption that the God of Islam and the God of Christianity are one and the same.

When, on September 11, 2001, some Muslims carried out a well-organized attack, destroying the The World Trade Center and damaging the Pentagon, a letter of last instruction from the leaders of the terrorist network was discovered. Written in Arabic, it says their mission was a service to God. Actually this was a mistranslation. The word the terrorists used is not the Arabic word for God but Allah. The Arabic word for God is Ilah. So they believed they were working for Allah, not God.

Who is this Allah? Were these terrorists extremists, or were they serving the Allah of the Qur an? The war against terrorism goes beyond overthrowing the Taliban regime in Afghanistan or even killing Osama bin Laden. The war on terror may not be won unless we understand the Allah the terrorists say inspires them.

Not all Muslims are terrorists. But the terrorists letter, which is quoted fully in chapter three, gives great insight into the Islamic religion and the motivation for religious terrorism in the world.

Why have we shied away from probing the identity of the Allah of Islam? Possibly it is because if Allah is not the God of the Bible, it would force us to face many ugly facts. For example, if Allah is the true God, and the Qur an, Islam s sacred book, is true, then Christians can be sure they are lost, no matter how zealous they may be. The reverse would also be true. It is necessary, therefore, to provide sufficient information to enable you to determine your own verdict, and answer the question: Who is this Allah? This book will do that.

Christ of the Covenants

Christ of the Prophets

In Understanding Be Men