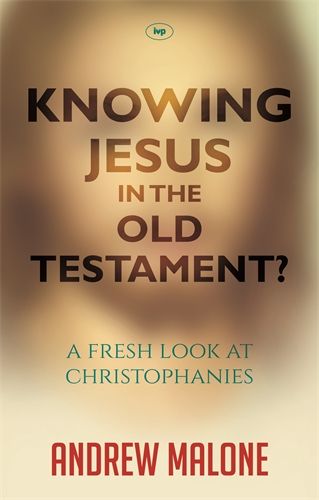 Knowing Jesus in the Old Testament? A Fresh Look At Christophanies by Andrew Malone and published by IVP Books.

The language of 'christophanies' is used technically by scholars to refer to appearances of the incarnate Son of God after his resurrection, as narrated in the New Testament Gospels and Acts. At a more popular level, though, the term is increasingly applied to alleged appearances of the pre-incarnate Son in the Old Testament. That Jesus appeared to - and was even recognized by - the likes of Abraham and Moses is usually argued from several scriptural trajectories.

The New Testament suggests that God the Father is invisible, inviting us to ask who conducted the Old Testament appearances; the mysterious Angel of the Lord has often been interpreted as a manifestation of the divine Son; and several New Testament passages imply Old Testament appearances of and encounters with Jesus. It seems obvious, indeed orthodox, to affirm that Jesus has always been at work in communicating with and saving his world. However, Andrew Malone argues that, while Christ-centred readings of the Old Testament abound, christophanies prove to be a flimsy foundation on which to build. Despite apparent success, any scholarship commending the idea does not withstand close scrutiny. Malone carefully sifts the evidence to show that the popular arguments should be abandoned, and that the pursuit of Old Testament christophanies ultimately threatens to undermine the very values it promotes.

He concludes that it better honours the Trinity and the text of Scripture to allow that the Father and the Spirit, as well as the Son, were themselves involved in Old Testament appearances.