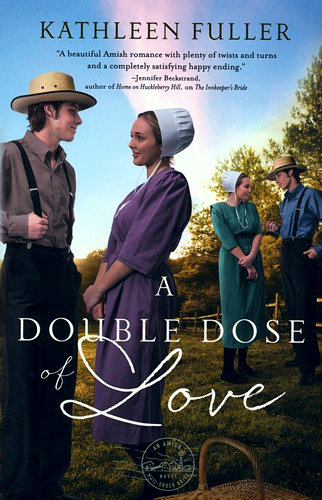 A Double Dose of Love, Amish Mail-Order Bride Series by Kathleen Fuller and published by Zondervan.

Identical brothers Zeb and Zeke Bontrager aren’t looking for love. They have their hands full with a new horse farm, a half-finished ranch house, and a wild colt, thanks to Zeke’s hasty business dealings. Now Zeb must contend with Zeke’s bad decisions, hidden debts, and tendency to avoid responsibility, which threaten their good standing in the Birch Creek Amish community.

When a newspaper ad prompts Darla King to travel to Birch Creek in search of a husband, her identical twin, Amanda, promises their parents she’ll convince Darla to come home. After all, Amanda is the responsible and reliable one. She has always protected Darla, who acts on impulse and trusts people too easily. The sisters’ close relationship is strained as Darla asserts her independence and Amanda grapples with regrets of her past and the longings of her own heart.

When Zeb and Amanda join forces to protect Darla and Zeke from each other, none of them can possibly predict the outcome as all four come face-to-face with their highest hopes and deepest insecurities in the first installment of the Amish Mail-Order Bride series.

A Christian's Pocket Guide to the Papacy - CPGS

'Return to Me', A Biblical Theology of Repentance - NSBT