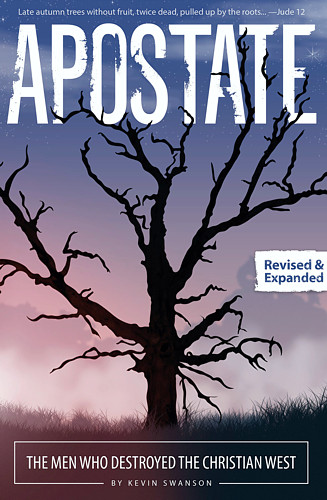 Apostate: The Men Who Destroyed the Christian West, Revised by Kevin Swanson and published by Generations Publishing. Whatever happened to Western civilization? Christians have lost ground in every cultural area of leadership and influence in Europe and America since 1700. This is an indubitable fact. The remaining Christians search for an explanation. They want to know how it happened. Apostate story of the decline and fall of Western civilization as experienced through the lives and ideas of the great philosophers, writers, and cultural leaders most responsible for its demise... Apostate is a story of demonic possession, insanity, suicide, mass-murder, adultery, homosexuality, cultural and social revolutions, and unbridled, maniacal apostasy. It is the story of apostasy on a massive scale.

But it is also a story of hope and victory for the last men standing in the ashes of Western civilization. It will be a testimony to the inevitable triumph of Jesus Christ over the great men of renown who tried to oppose the King of kings and Lord of lords. This second edition of Apostate has been revised and expanded from the first edition. This new edition contains a new chapter on the influential economist John Maynard Keynes.

Text a Day - Keeps the devil away