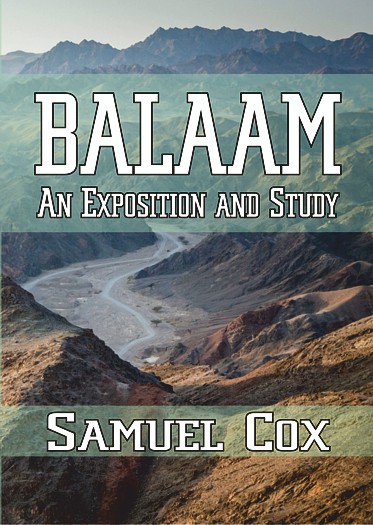 Balaam - An Exposition and Study - CCS by Samuel Cox and published by Classics.

BALAAM was “A man of two minds, he is unstable in all his ways.”

Even in the noble portrait-gallery of the Old Testament there are few figures more striking, more impressive, or more perplexing than that of Balaam. A heathen, not a Hebrew, and yet elected for special distinction in the service of God; a diviner, seeking omens and auguries and interpreting them after the approved methods of the ancient East, and yet a prophet who heard the words of God and saw visions from the Almighty with opened eyes.

He was a soothsayer, affecting to foretell and even to control human destinies, and yet a seer familiar with the ecstasies of the prophetic trance, and to whom the inspiration of the Almighty gave understanding of things to be; a man of God who, in the face of all threatening and allurement, professed that he could not go beyond the word of the Lord his God.”

The problem of his character - how a good man could be so bad and a great man so base - has not yet been solved; we are as far perhaps from its solution as ever: but something has been gained if only we have the terms of that problem more distinctly and fully before our minds. To reach the solution of it, in so far as we can reach it, we must fall back on the second method of inquiry which, at the outset, I propose to employ.

We must apply the comparative method to the history and character of Balaam; we must place him beside other prophets as faulty and sinful as himself, and in whom the elements were as strangely mixed as they were in him: we must endeavour to classify him, and to read the problem of his life in the light of that of men of his own order and type. Yet that is by no means easy to do without putting him to a grave disadvantage. For the only prophets with whom we can compare him are the Hebrew prophets; and Balaam was not a Hebrew; he was not bound, and therefore he must not be judged, by their law; he had no part in the special election and grace vouchsafed to them.