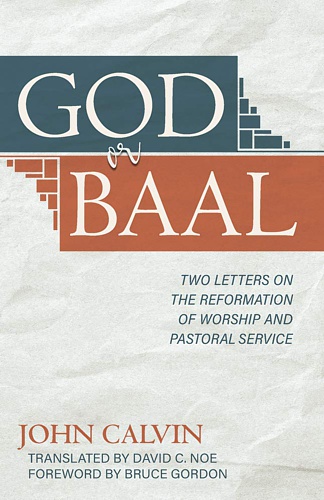 God or Baal: Two Letters on the Reformation of Worship and Pastoral Service by John Calvin and published by Reformation Heritage Books.

For too long a picture of the young Calvin’s theology has been only partially available in English, with the result that key moments in the development of his reforming vision have been obscured. David Noe’s crisp and complete translation of Calvin’s first publication after his arrival in Geneva makes the full scope of Calvin’s early reforming priorities accessible and so illuminates for English readers the emergence of central themes in Calvin’s religious thought between the writing of the first (1536) and second (1539) editions of the Institutes.

In this book, consisting of two open letters published in March 1537, Calvin for the first time openly criticizes the moderate French evangelical reform movement of which he had recently been a part. He intensifies concerns with idolatry, more aggressively attacks the Mass, and distinguishes the respective duties of laity and those holding church office to conform outer behavior to their reformed religious convictions when living as religious minorities. Read together, these two letters stand as Calvin’s earliest public declaration of an emerging sense of his professional obligations as an office holder in a reformed church shaped by the radical evangelicalism of his recent but from this point on abiding associates, Guillaume Farel and Pierre Viret.

How to Read Exodus

Are Miraculous Gifts for Today