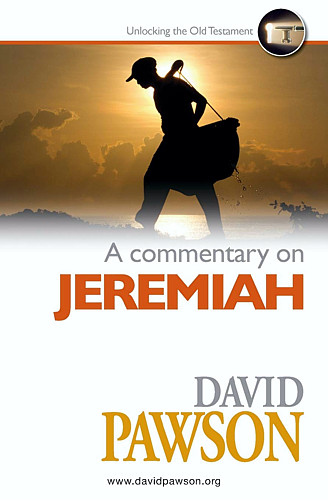 A Commentary on Jeremiah by David Pawson and published by Anchor Publishing.

Jeremiah was God’s man for a nation declining from having been one of the first powers to being a very third-rate power, a nation losing its empire, losing its territory, a nation getting involved in all sorts of relationships with other nations to try to survive by joining larger power units, a nation that was doing exactly what ours is doing, and that was becoming weak in its external and political relationships because it was becoming weak morally and spiritually inside. As we go through this prophecy you will think you are reading the Sunday newspapers. It is a most relevant part of God’s Word. People used to bring me newspaper cuttings during our studies of Jeremiah. They were taking the Word of God, then picking up their newspaper the next morning and relating God’s eternal Word with man’s word. It becomes possible to see how it all fits.

Christian on the Mount - Treatise on Meditation