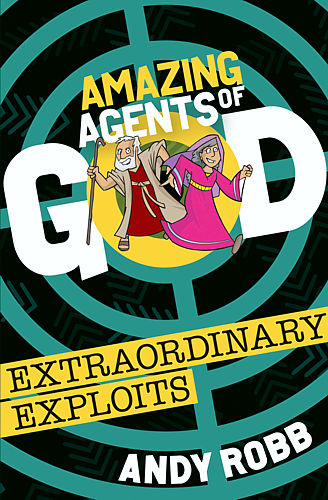 Amazing Agents of God, Extraordinary Exploits by Andy Robb and published by CWR.

In the God Files (Bible) there are many reports of amazing agents who undertook special missions for their boss (God). These agents were just ordinary people who became inspiring and exciting role models for you and me, people like:

AGENT DEBORAH - a remarkable lady who was one of the judges of Israel and helped to win a significant battle.

AGENT MOSES - as a baby, he nearly died but was rescued by a princess. He later freed his people from slavery in Egypt.

AGENT HANNAH - a woman who was desperately sad at not having children. But God heard her prayers and answered them.

AGENT SAMUEL - as a boy, he heard God speak to him. As a man, he anointed two kings.

AGENT PHILIP – a follower of Jesus who took routine tasks and supernatural travel missions in his stride.

So get reading these agent reports in this special dossier and find out how you too could become an amazing agent of God!