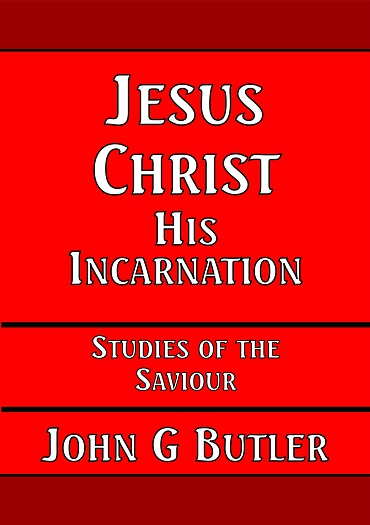 Jesus Christ: His Incarnation, Studies of the Saviour - CCS by John Butler and published by Classics.

Butler has organized this study on the subject of the incarnation of Jesus Christ into six major parts: * The Background of Christ: four studies on key texts of Scripture showing the identity of Christ as both God and man.

* The Birth of Christ: nine studies on all the major texts of Scripture which give details about the birth of Jesus Christ to Mary in which God was incarnated in the likeness of human flesh.

* The Boyhood of Christ: a study of the only text of Scripture which records the actions of Christ when He was a young boy.

* The Baptism of Christ: a study of this significant and often misunderstood event which commenced the public ministry of Christ.

* The Battle of Christ: four studies on the great temptation experience of Christ in which His identity as the Son of God was challenged very strongly by Satan.

* The Beautification of Christ: a study of the glorious transfiguration of Christ in which the glories of the Deity of Christ radiated forth from the Incarnated Christ for a small time during His ministry here on earth.

The Life of Elijah