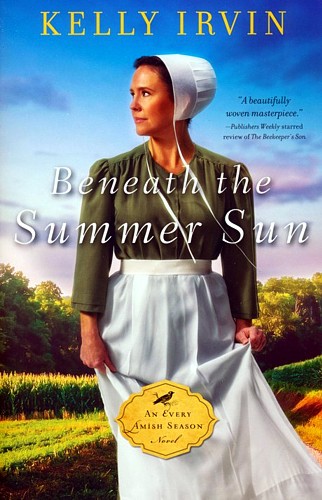 Beneath the Summer Sun, Every Amish Season Series by Kelly Irvin and published by Zondervan.

Four years after Jennie Troyer’s husband dies in a farming accident, the elders in her Amish community express that it’s time for her to marry again for the sake of her seven children. They think that grief is holding her back from a new relationship, but instead, it is fear of being in another abusive marriage.

A Mennonite book salesman Nathan Walker stops by Jennie’s farm when he’s in the area. The two enjoy years of conversation and dinners together, yet she never seems to relax around him. He knows he should move on, but something about her keeps drawing him back.

Leo Graber has been in love with Jennie since his teenage years. Guilt over his father’s death put a stop to him moving forward with her. Now he is hoping for a second chance.