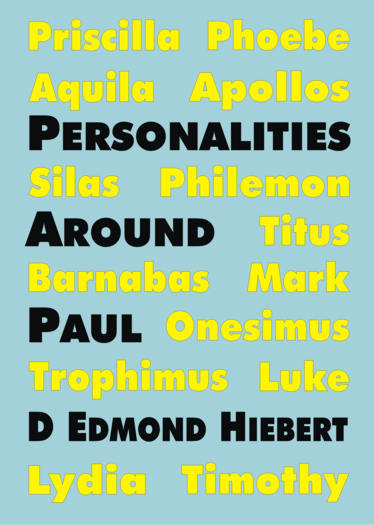 Personalities Around Paul by D Edmond Hiebert and published by Classics.

In this volume D. Edmond Hiebert presents the personalities around Paul. With the exception of Jesus Christ, no one figures more prominently in the pages of the New Testament than the Apostle Paul. Author of thirteen New Testament books and a central figure in the book of Acts, Paul was the individual most responsible for the spread of the gospel in the first century. Yet he was not alone in his labours. Hiebert, a noted author, teacher, and Bible commentator, takes a look at many of Paul’s many co-labourers.

Beginning with an introductory sketch of the apostle Paul, the centre of the study, Personalities Around Paul, moves outward in concentric circles. Part One deals with eight of the prominent personalities such as Apollos, Luke, Barnabas and Timothy. Part Two considers “lesser lights” such as Trophimus, Onesimus and Phoebe. Part Three deals with all the others referred to in the New Testament whether named or not.

Daniel the Man and His Message - CCS

The Kingdoms of God and Heaven; and Other Papers

Preach the Word - Over 850 Sermon Outlines