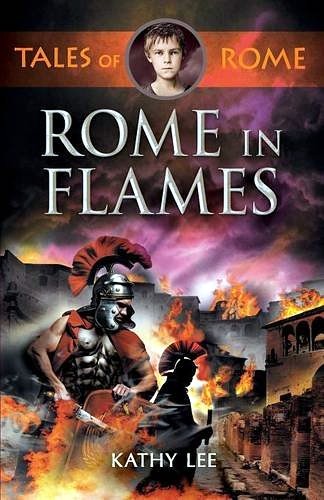 Rome in Flames, Tales of Rome Series by Kathy Lee and published by SPCK Publishing.

At the start of book 2 in the Tales of Rome series, we find 13-year-old Bryn working a baker's shop in Rome but still dreaming of returning to his British homeland. Nero has been emperor for ten years and many fear him. Nero particularly dislikes Christians, who worship their own God instead of the emperor, and has had some arrested and killed. A great fire breaks out in the city, and Bryn and his friends escape to the outskirts, to the home of a rich slave-trader, Septimus.

Bryn returns to the city to see the damage and finds a city in ruins. However, he also sees members of Nero's own Praetorian Guard setting fire to houses. Rumours fly that the Emperor has had the fire started deliberately in order to clear ground to build a grand new palace, but others blame the Christians. Bryn is amongst those arrested. Nero wants to round up a hundred Christians and have them set alight as a mighty spectacle. Will Bryn and his friends survive?