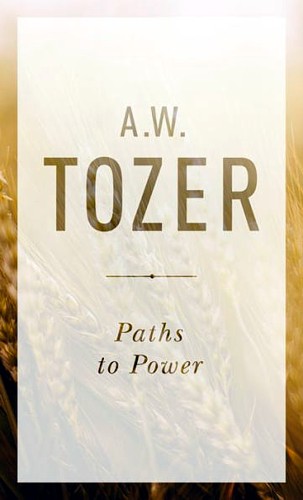 Paths To Power by A.W. Tozer and published by Moody Publishing.

A.W. Tozer begins this book, titled, Paths to Power, with a powerful statement about the history of the world and the role of the Christian. "The greatest event in history was the coming of Jesus Christ into the world to live and to die for mankind." In Paths to Power, Tozer makes a thesis (that God s plan) falls into line with this one simple and dramatically powerful event and then goes on to examine the state of the current church with its lukewarm moral convictions, its members who lack the power of the Spirit and its administrators who work to pay bills and fulfill their weekly obligations rather than feed the flock and pay attention to shepherding their flocks.

A.W. Tozer inspires conviction to restore the church to its place of power, when it can be a moral force to be reckoned with. He states the compelling power of the burning bush that Moses saw and Tozer says, no one is afraid of mere ashes. This indictment of modern man s complacency is pungent and will hold the believer accountable of sloth and uninspired faith in the Lord. This book challenges to live a more Spirit-filled life. Tozer reminds the reader that God s work is redemption and salvation, but it is our responsibility to repent and believe, and as a result of that, to obey the Word of God. Tozer offers a stern warning against excusing sin as an affront to God.

Wings of the Morning

I Call It Heresy: And Other Timely Topics from First Peter

Heroes and Heroines of the Scottish Covenanters *