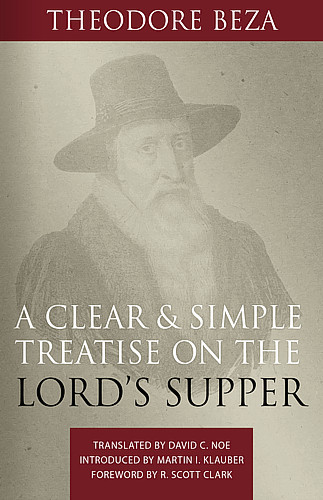 A Clear and Simple Treatise on the Lord's Supper by Theodore Beza and published by Reformation Heritage Books.

Theodore Beza’s A Clear and Simple Treatise Respecting the Lord’s Supper (1559) advances a tireless defense of the Reformed perspective on the Lord’s Supper, responding chapter by chapter to specific arguments raised against John Calvin by his Lutheran opponent, Joachim Westphal. Beza makes great use of the concept of metonymy, or a figure of speech, in his interpretation of the words of institution, yet he equally champions the position that the Lord’s Supper is not a bare symbol and that in it we have true communion with the risen Christ. And like Calvin, Beza refers extensively to the church fathers, especially Augustine, in defense of his position.

This often-overlooked treatise marks some of the major differences between the Reformed and the Lutheran movements during the so-called second generation of the Reformation. A critical issue at the time, sacramental theology was at the forefront of the original break with Rome and prevented the various Protestant movements from uniting. Its translation into English from the original Latin provides a wider opportunity for those interested in these movements to learn more about some of the substantial issues of the period. Appended to the book are two smaller treatises of Beza: A System of Doctrine on the Sacramental Substance and The Law of God in Various Classes.

Thoughts on Preaching and Pastoral Ministry

Trinity And the Covenant of Redemption

Mystery of the Lords Supper - Sermons by Robert Bruce

Is it True ? Evidence for the Bible - Booklet