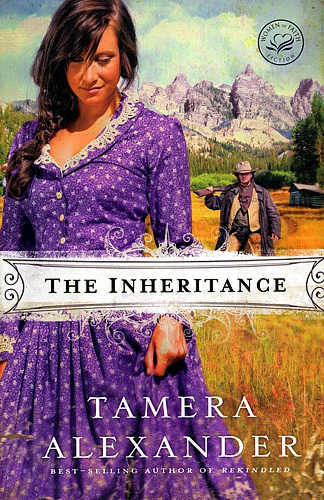 The Inheritance, Women of Faith Series by Tamera Alexander and published by Thomas Nelson.

Desperate for a fresh start, McKenna Ashford accepts her cousin's invitation and moves west with her rebellious younger brother to the not-so-quaint mountain town of Copper Creek, Colorado. She arrives only to find that life there is far from what she expects. Having practically raised Robert on her own, McKenna is burdened both with her failure as a parent and her deep conviction to not let her brother throw his life away. Trusting has never come easily for her--especially in issues of the heart--and that inability to trust is put to test when she meets U.S. Marshal Wyatt Caradon.

After years on the trail, Marshal Wyatt Caradon finds himself at a crossroads. He's brought countless men to justice, but he questions what lasting good his life has accomplished. When his path intersects that of young Robert Ashford, Wyatt glimpses himself, years ago, in the boy's pride and arrogance. He also sees a boy without a firm hand in his life. His well-meant attempt to help Robert brings him face-to-face with the one situation he never wanted to encounter--and the one woman who holds the key to helping him find his future.