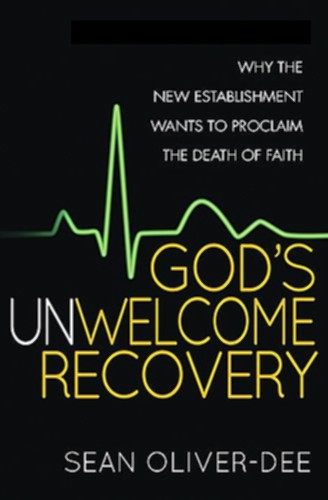 God's Unwelcome Recovery, Why the new establishment wants to proclaim the death of faith by Sean Oliver-Dee and published by Monarch Books.

There is a disconnection between the official accounts being peddled in political and media circles telling us that Christianity is on the decline in the West, and the reality of church growth on the ground. Why are such different pictures being painted? Sean Oliver-Dee suggests that something very deliberate is being done. While setting the record straight on church growth, he exposes the social and political agenda that underpins the narrative of the death of faith.

Sean Oliver-Dee Sean proposes that the growth of the church is not being acknowledged because it contradicts three myths that the new establishment wants to assert: firstly, the gradual death of religion is a good excuse to ignore the views of Christians on public matters; secondly, encouraging Christianity to die would benefit society because religion is perceived as a primary cause of world violence and thirdly, that there is a trajectory of progress focused around scientific enlightenment, which will necessarily cause the death of faith. God's Unwelcome Recovery reveals how the growth of the Church runs contrary to all three assertions: It’s time to challenge the myths.