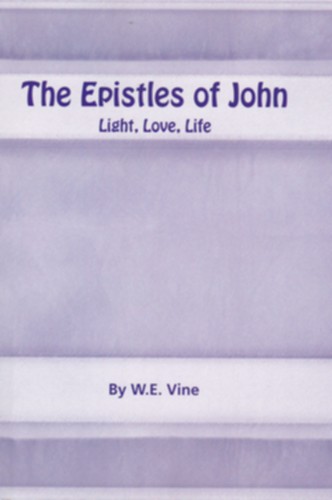 The Epistles of John, Light, Love, Life by W E Vine and published by Classics.

The Epistles of John are three letters in the New Testament of the Bible traditionally ascribed to Saint John the apostle. They are classed with the General, or Catholic, Epistles because they are addressed to a general readership rather than to specified churches or individuals. The first epistle bears no clue to its authorship, but in the other two epistles the author calls himself "the elder." The three letters were probably written in the Roman province of Asia (western Anatolia) toward the end of the 1st century.

The first epistle should probably be understood as a general pamphlet written to churches in Anatolia. Its message is about life, meaning eternal life, life in fellowship with God through faith in Jesus Christ. The book was written to give a series of standards by which people can know that they possess eternal life. Two features stand out in the series of tests. First, the validity of the Incarnation is affirmed against those who claimed special knowledge (see Docetism; Gnosticism) and denied that Christ came in the flesh (1 John 4:2 - 3). The second feature of the test is love. The true follower of Christ is to love as Christ loved (1 John 2:6; 4:7 - 12, 19).