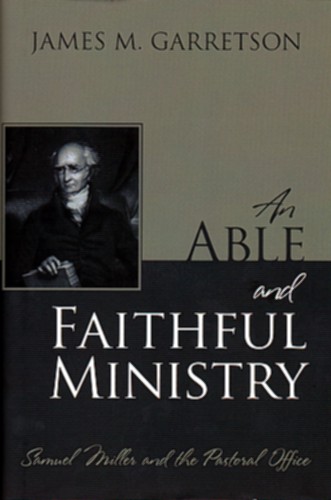 An Able and Faithful Ministry: Samuel Miller and the Pastoral Office by James M Garretson and published by Reformation Heritage Books.

Samuel Miller (1769–1850) played an integral part in founding Princeton Theological Seminary, which became one of the most influential training grounds for Presbyterian ministers in the nineteenth century. While Miller is most commonly remembered for his writings on church office, he also played a significant role instructing students and shaping their theology of preaching and pastoral ministry. In the present volume, Jim Garretson highlights the narrative of Miller’s life and the major ministerial emphases found in his published writings, sermons, and unpublished lecture notes. As a result, readers will come to know the spiritual convictions of Miller’s heart and understand the theology of ministry he imparted over the course of his lifetime.