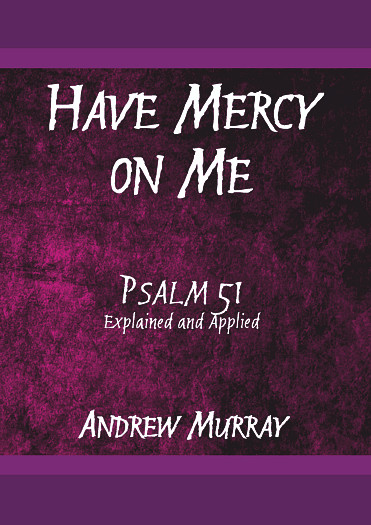 Have Mercy Upon Me - Psalm 51 - CCS by Andrew Murray and published by Classics Publications.

The Fifty first Psalm is on all hands acknowledged to be one of these cardinal portions of the Bible. Yet the number of detailed expositions of is meaning is comparatively small. This result has unquestionably arisen from the felt difficulty of doing anything like justice to its searching and humbling utterances. Much as the Psalm has been used in preaching, ministers have felt so keenly the inadequacy of their efforts to set forth the fullness of its teaching, that they have been glad to leave their lectures unpublished.

It is under no sense of having been able to succeed where others have failed that the Rev Andrew Murray of the Dutch Reformed Church at Wellington has been led to present the following exposition of this great Psalm. A glance at the tender and beautiful preface which he wrote for his own congregation will show that he cherishes very different thoughts. It is only because he feels that this Psalm contains a message which the present state of spiritual life in and around the Church sorely needs, that he has been led to send forth this volume. The late Dr. Duncan of the New College, Edinburgh, used to tell his students that the one great heresy which afflicts the Church and keeps back the conquest of the world for Christ is defective views of sin. It is because this Psalm contains such an unreserved revelation of the soul's experience under the felt guilt, misery, and corruption entailed by sin, conjoined with an equally marvellous insight into the loving kindness and tender mercy of 'the God of all grace,' that this fresh attempt to unfold its meaning has been made.

From this aim it follows that the whole exposition has been of set purpose written with the utmost simplicity. It is not 'wisdom of words,' but words of wisdom set in sentences which every reader can understand at once, that this hard driven, weary generation needs. We shall be greatly surprised if the perusal of this little book does not prove to many the starting point alike of a deeper conviction of sin and a more holy and consecrated life.