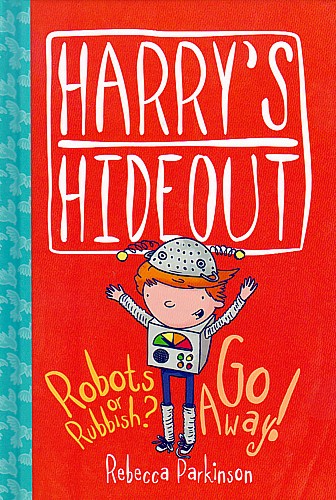 Harry's Hideout - Robots or Rubbish / Go Away! by Rebecca Parkinson and published by CWR.

Harry loves the Hideout that he built with his Grandad. In it he keeps the very special book that Grandad gave him to help him to learn about the Person who made the whole world. But it’s not just any book – it’s a portal to Bible times.

In Robots or Rubbish? Harry is dejected after he is chosen to collect rubbish instead of making a robot. But after his special book takes him to see Jesus washing His disciples’ feet, Harry realises that The Big Tidy Up can be his way of showing love and care to his friends. When a space unexpectedly crops up for robot building, Harry chooses to let another child take the place. But instead of being a servant who clears up other people’s mess, Harry becomes a champion when his school wins a competition for the best kept grounds.

In Go Away! Harry is so miserable when nobody in his family wants to play with him that he takes himself to his hideout to read his special book. It takes him back to Bible times where he sees the disciples sending children away because Jesus is tired. But then Jesus calls the children to Him and prays for each of them. Just as Jesus is about to pray for Harry, he finds himself back in his hideout. When his family explain that they were busy getting their jobs done so that they could take him to the water park for the afternoon, Harry decides that it’s great to have a family who care for him and even better to know that Jesus will never turn him away.

David Livingstone - Who is the Bravest? (Little Lights)

Amy Carmichael - Can Brown Eyes be Made Blue ? (Little Lights)

Hudson Taylor - Could Somebody Pass the Salt ? (Little Lights)