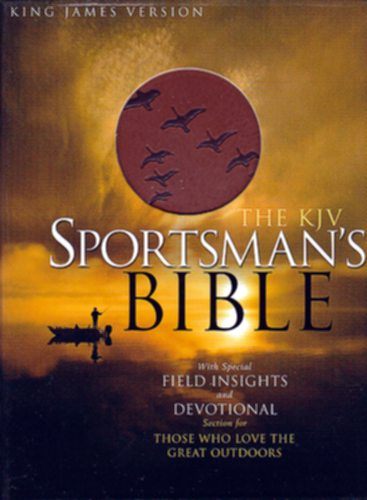 The perfect gift for Father’s Day, a son’s birthday, graduation, or any time, The KJV Sportsman’s Bible is ideal for slipping into a pocket and carrying into the field. In addition to the full text of the beloved King James Version, this large print compact Bible edition contains numerous devotions written for hunters and fishermen that connect the timeless principles of God’s Word with the passion of millions of North American outdoors enthusiasts.

In 2000, over 15 million Americans purchased hunting licenses, and 30 million bought fishing licenses. Churches are becoming aware of this significant market and are sponsoring wild game dinners and father-son ministries that focus on men’s interest in hunting and fishing. Jason Cruise, founder and president of the Tennessee Outdoor Network and an ordained Baptist minister, is executive editor of the special devotional section which includes articles by well-known sportsmen plus helpful outdoors tip