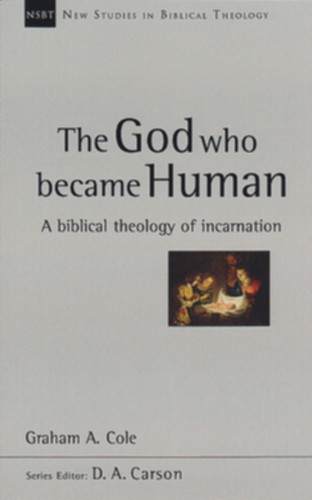 The God Who Became Human: A Biblical Theology of Incarnation by Graham A Cole and published by IVP / Apollos.

The study of themes plays a major part in biblical theology, and great events and roles that are pivotal in Christology can be successfully placed in a 'promise-fulfilment' framework. However, is incarnation an anomaly? Was incarnation part of the hope of Israel?

Graham Cole's stimulating study addresses such questions. He begins by exploring the purpose of creation in terms of God fashioning a palace-temple for dwelling with the creature made in the divine image, then follows God's acts in Israel's history to redeem a people of his own among whom he can dwell. In particular, he examines theophanic language: God is presented as a person who speaks, acts and feels as though embodied. He considers Israel's messianic hope, and then the testimony of the New Testament: 'The Word became flesh and dwelt among us' (John 1:14), in the person of Jesus Christ.

Cole also addresses the question raised by Anselm - 'Why did God become man?' - and finds abundant New Testament answers. He concludes with a consideration of the theological and existential significance of the incarnation.

Readers will gain a deeper appreciation of the astonishing providence of God that subtly prepared the way for the mystery of the incarnation, and of the depth of love that God showed in sending the beloved Son who became human.

Whos Tampering with the Trinity - out of stock

Far as the Curse is Found - Covenant Story of Redemption