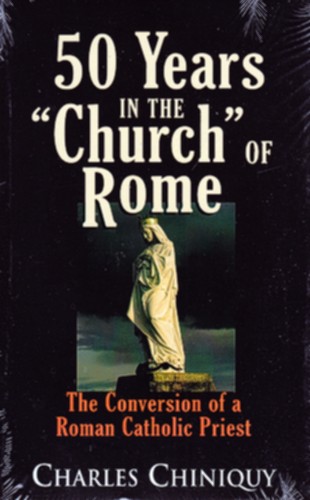 50 Years in the "Church" of Rome: The Conversion of a Roman Catholic Priest by Charles Chiniquy and published by Chick Publications.

Would he obey his church or his Bible? Here is the heart-wrenching struggle of a man torn between his religion and Christ, between men's traditions and God's Word. As a child, Charles Chiniquy memorized Scriptures at his mother's knee. Longing to serve God, he became a Roman Catholic priest. He wanted to trust his "church", but was tormented as he watched it repeatedly violate the Word of God that it claimed to obey. Finally, Chiniquy was ordered to give up his precious Bible and pledge blind obedience to the "church." After a dark night of struggle, he emerged gloriously saved through faith in Christ.

Learn how he led almost his entire Catholic congregation to trust in Christ alone. See how his desire to please his Saviour caused conflicts with his Catholic superiors. Learn how he was framed by the Jesuits, and how a young lawyer named Abraham Lincoln saved his reputation. Chiniquy proves that it was the Jesuits who later killed Lincoln, and explains why. All Christians need to learn these important insights into the Catholic religion, written by one who lived within her walls for many years.

How to Walk in the Supernatural Power of God