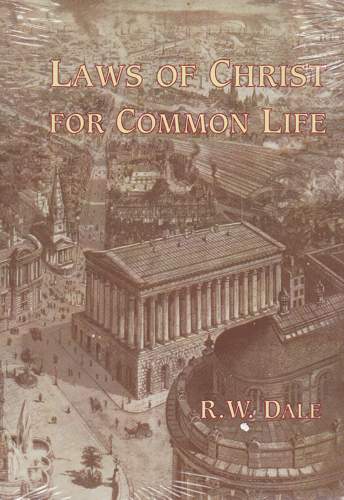 Robert William Dale was born in 1829 and served as pastor of Carrs Lane Church, Birmingham, from 1854-1895. He arrived in Birmingham in 1847 to study at Spring Hill Congregational College. He had already shown a gift for preaching, and his potential was quickly recognised by John Angell James, the pastor of Carrs Lane Chapel, who frequently invited him to preach there. Despite doubts and criticism and some disagreement over theology, there was a mutual affection and respect between James and Dale, and in June 1854, Dale accepted the Church’s invitation to become co-pastor. Following the death of James in October 1859, Dale became sole pastor, and established over the years a world-wide reputation for Carrs Lane. He was best known as a preacher, and openly read his sermons saying, ‘If I spoke extemporaneously, I should never sit down again.’

Dale’s integrity, intelligence, moral passion and oratory soon made him a national figure in an age when the strength of non-conformity was at its highest. He welcomed social improvement and was an advocate, with George Dawson, of what became known in Birmingham as the ‘civic gospel’.

This volume of sermons takes the teaching of our Lord and applies it with power and relevance to the evils of an industrial society. The sermons reveal much of Dale’s concern for his congregation, labouring as they did in the offices and factories of the city.