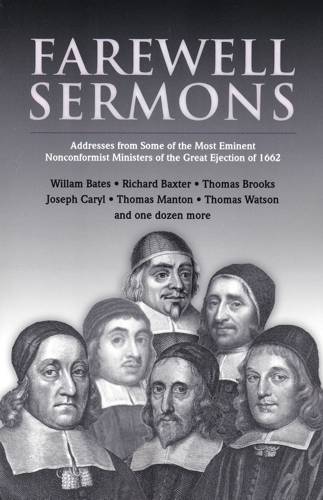 This is a New Edition of "FAREWELL SERMONS: Addresses from Some of the Most Eminent Nonconformist Ministers of the Great Ejection of 1662.

The following paragraphs from Original Preface will explain the power in this volume: "Most of the sermons contained in this collection were delivered on the twenty-fourth of August, in the year 1662. On that day the act requiring a perfect conformity to the book of Common Prayer, and to the rites and ceremonies of the church took place: the effect of which enactment was the silencing of nearly two thousand five hundred ministers, the death of three thousand nonconformists, and the ruin of sixty thousand families. Such was the result of the restoration of Charles the Second of infamous memory.

To ascertain the spirit which actuated the ejected ministers, it is sufficient to refer to the following selection of their farewell sermons, which were delivered at the very moment they were agonizing under the fangs of persecution, but which discover nothing but a combination of christian graces. Bishop Burnet admits that 'many of them were distinguished by their abilities and their zeal '; and the celebrated Locke has remarked, 'Bartholomew-day was fatal to our church and religion, by throwing out a very great number of worthy, learned, pious and orthodox divines.'"