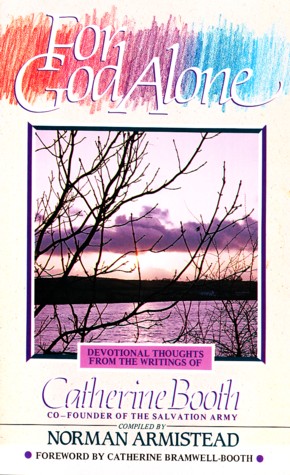 For God Alone: Devotional Thoughts from the Writings of Catherine Booth, compiled by Norman Armistead and published by Ambassador Productions.

This a selection of nearly 200 devotions from Catherine Booth which have been compiled under various headings such as "The Bread of Life", "The Compassion", "Resistance" and "Affliction."

Catherine Booth. co-founder with her husband, William of the Salvation Army. was promoted to Glory over one hundred years ago. Born at Ashbourne, Derbyshire in 1829, from her childhood she held deep convictions, strong-beliefs, and developed a forthright way of expressing her views. Despite ill health, life long frailty, and raising a large and devoted family, she became one of the" most powerful women preachers of her generation.

A persuasive evangelist and teacher, Catherine Booth addressed large public meetings throughout Britain and was a prominent figure. with her husband, in the 1 859 Revival. These devotional writings throb with spiritual energy and have much to teach us over one hundred years on after her death.

The Autobiography of George Muller